The season of witches is here with us. Are you looking for some truly amazing spooky Halloween ideas to indulge the imagination of your guests? Look beyond the usual decorations and scare your guests with these bone-chilling mason Jar ideas. Your ordinary mason jar can be converted into a menacing spectacle if you apply some creativity using weird colors or trapped spiders.

The ordinary items that clutter your indoor and outdoor spaces can be turned into horrifying silhouettes and insidious night creatures inside or around the mason jar to give your home the fearsome appearance of a haunted abode.

Check out these easy and creative ways to decorate your home with mason jars for this halloween, which are perfect additions to your house.

Recycle your ordinary mason jar into a spooky abode of crawly and scary spiders by using dead spiders, black nail polish, flameless tea lights, fake spiderweb and hot glue. Age the mason jar by smearing the top and bottom areas of the jar with black nail polish. Lighting tea lights attached to the bottom of the jar will reveal a horrifying spectacle at night. Get the tutorial via momdot.

The horrifying gaze of a bright-eyed mummy in darkened mason jar is something that will catch your guests’ eyes at first glance in a Halloween party. To achieve this particular spectacle, look for a mason jar, gold spray pain, rubber bands, a fine pain brush and eyeball paint. Mason jars with mummies in a shadowy room raises the air of horror, which is then pushed to even greater limits when bats stand above them. Get the tutorial via itallstartedwithpaint.

There are various ways by which mason jars can be turned into terrific items. Black, white and blue colors are just some of the choices that can produce the adorable decorations in a Halloween-themed room. One way of achieving this is to make the jar’s interior all white using white acrylic paint before adding various decorations. The blue and white polka dots on the white background can give the jar cute appearance. Get the tutorial via eighteen25.

Create a sinister indoor ambiance by lighting up various mason jars so that they show frightening glows. You need mason jars of different sizes, a black card stock, white Christmas lights, Mod Podge, and scissors. Cover the jars with tissue strips of a variety of colors such as orange, purple, black, green and white. Cut scary faces out of the black card stock and stick them against the tissue. Light up the Christmas lights inside the jars. source.

Capture your guests’ eyes by converting your mason jars into cool zombies. You can create this craft by painting you jar in a red color and letting it dry before you apply the grey coat. Then add google eyes to cast the scary glance that is typical of zombies. Find a way of scratching away some parts of the grey coating so as to reveal the red color. The color effect will make the eyes of the living dead appear more terrifying. Get the tutorial via masonjarcraftslove. 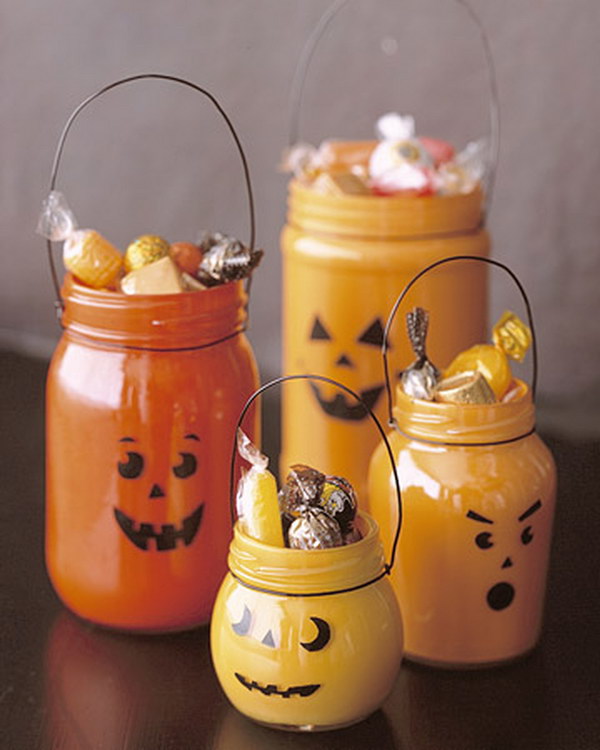 Paint your jar with yellow or orange colors. Then paint some stencil with black paint and let it dry. Paint scary faces on the surface of the jars to give them some scary aspect. Lighting a small candle should complete the Halloween effect. Get the tutorial via marthastewart.

Turning a mason jar into a scary spider is another great Halloween decoration idea. One way of achieving this is to paint one jar with a matte finish and the other one with a glossy finish. Use the pipe cleaners to make the knees and feet. Get the tutorial via masonjarcraftslove. 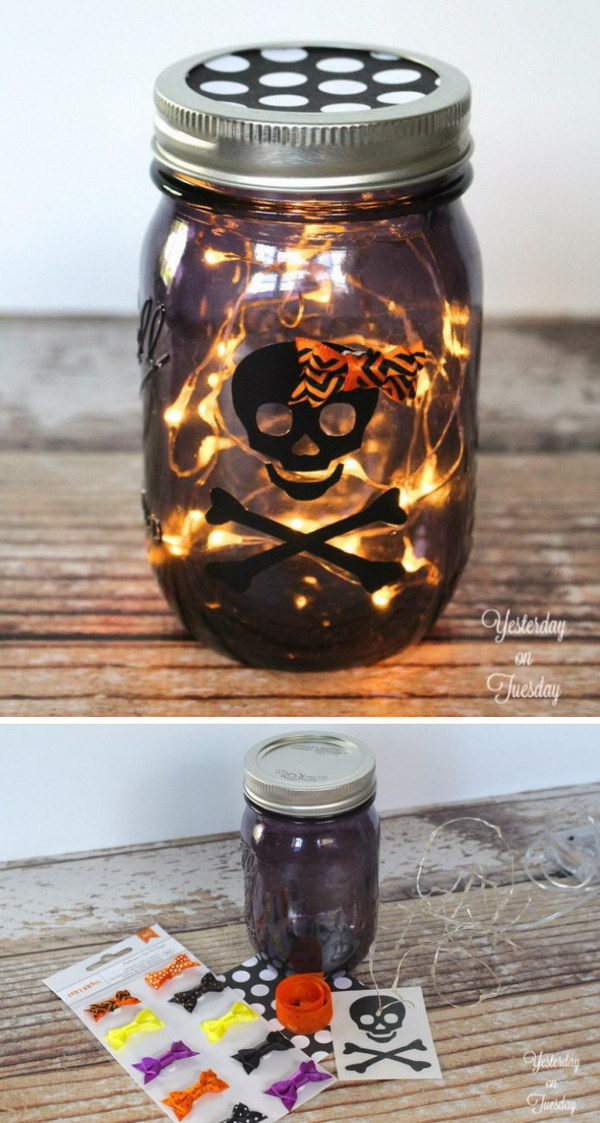 Do you want to scare the wits out of your guests during Halloween? Think of a mason jar, a selection of ribbons, Christmas lights, black nail polish and a paint brush as the items you need. Smudge the nail polish inside the jar and draw paint a skull and bones image outside the bottle. The little bow on the skull just makes this decoration perfect. via yesterdayontuesday. 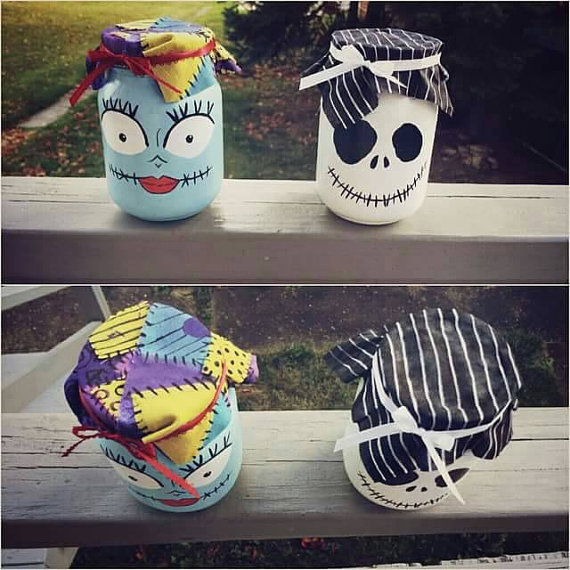 Make some cute Halloween lanterns with mason jars, tissues of various colors, some ribbon and hot glue. Stick the tissues around the jars with a candle inside to complete the Halloween display. Let the light reflect through the ghostly colors and transform your home into a haunted house. source. 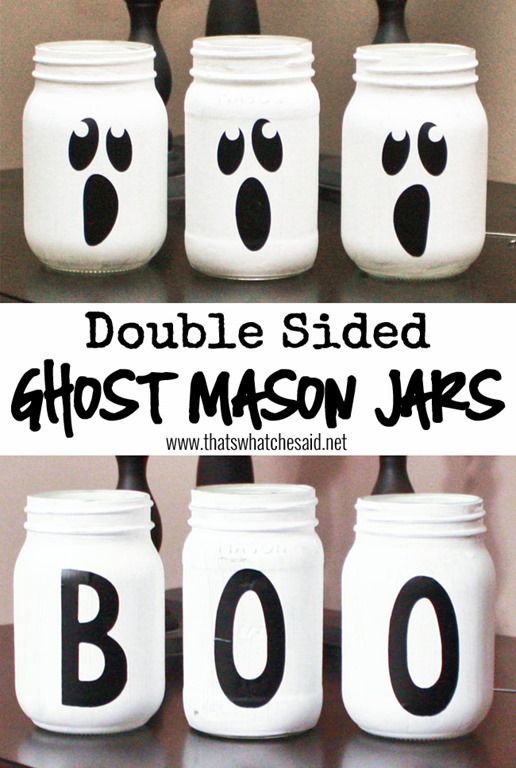 Convert your mason jars to double sided ghosts with this simple tutorial. These are perfect for your Holloween party as vases, candy dishes, lanterns or centerpieces! source. 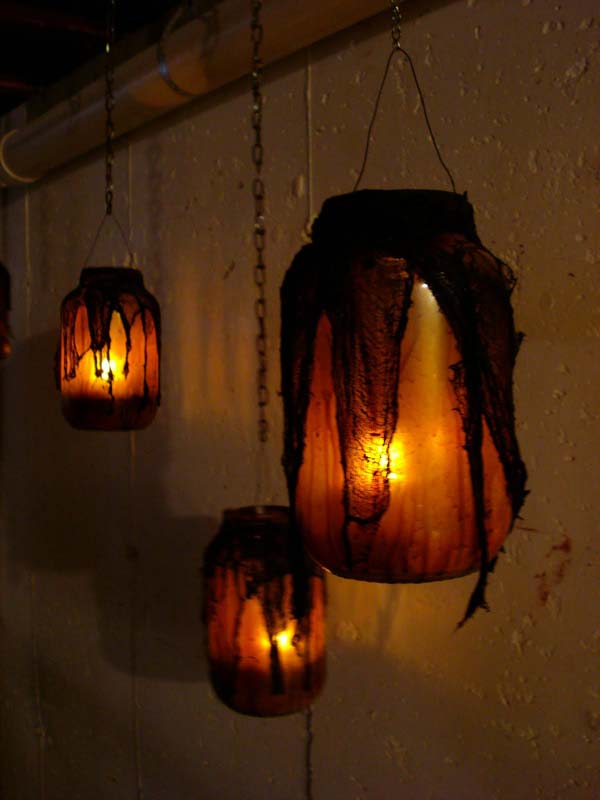 Another cool Halloween idea is turning the mason jars into spine-chilling witch jars and hanging them on trees. The first step is to spray the orange paint lightly inside the jars to give them the appearance of something truly sinister. You should then use the same to do some spattering on the sides. You will be amazed by the striking terror that your witch jars will give to the beholders. source.

This mason jar lid pumpkin project is perfect for the holiday and looks so easy. The simple stages involve using the spray paint to turn all the lid bands into a rich orange color. The dried bands should be held together with a string and tightened around the cinnamon sticks so that they appear like pumpkins. Get the tutorial via thecountrycook.

You might have to consider this particular decoration as perhaps the simplest of them all. Cut out Jack’s face on the vinyl. Attach it to the jar before the painting so that it is peeled off to reveal the inner brown coat in the shape of jack’s face. A ribbon of black and white can be used to complete the painting. source. 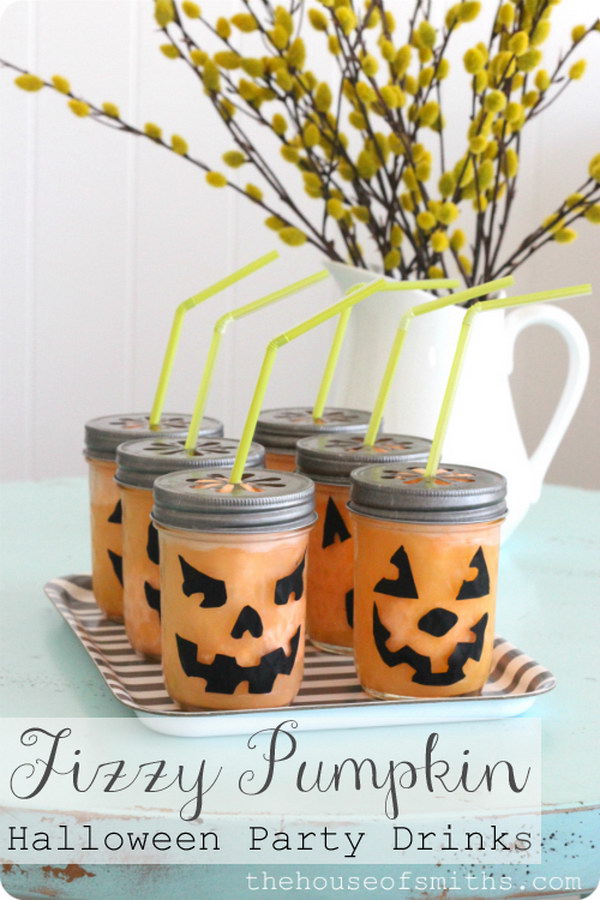 Don’t let Halloween go before you try out the pumpkin party drink. Mixing a cocktail of these juices gives you the great orange color to mark the occasion. The fun lies in drinking such a cocktail in jars with marvelous Halloween shapes and colors. Get the tutorial via thehouseofsmiths. 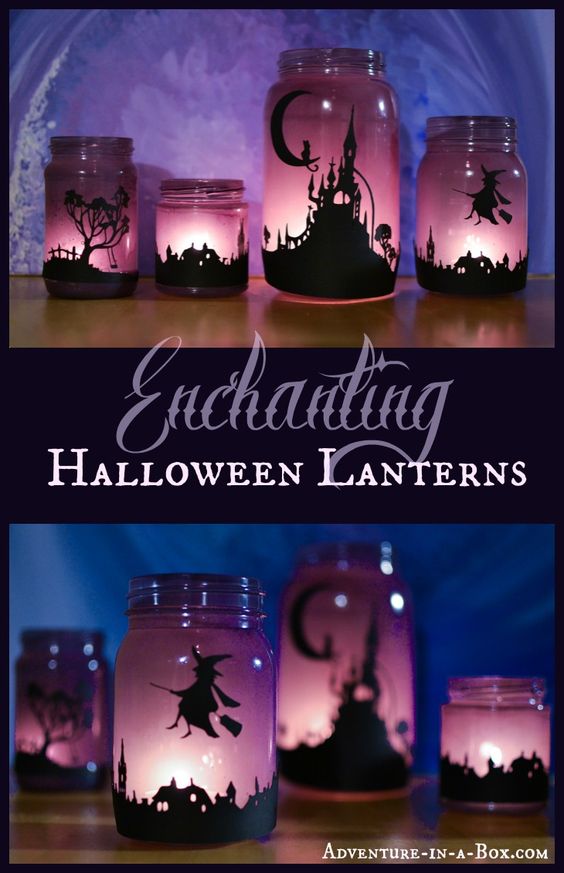 Fantastic Halloween Lanterns can be made using ordinary materials such as jars, paint marker, and purple spray paint. Spray paint the outside of the jar so that it appears translucent. You can paint various designs on the jar and allow it to settle for sometime so that they are absolutely dry. You will be amazed by the combination of the purple color when it is highlighted by the glow of the candle within the jar. Get the tutorial via adventure-in-a-box.

Do you want to make these scary white styrofoam ghosts and give them a terrifying posture within the mason jar? All you need are mason jars, styrofoam disks and balls, moss, sharpie, twigs from yard, gauze from first aid kit,scissors and glue gun. These are really cute and you will surely love them. Get the tutorial via masonjarcraftslove.

You will love the idea of the crow mason jar because it is simple but with remarkable aesthetic effect. The carvings of the crow are completed in colors that are connected with Halloween. Paint the jar all black except for a mid section that should remain transparent to show the predominant yellow and red colors. source.

Take one more step on the creativity path this Halloween and decorate your mason jars with googly eyes and spooky spiders. Attach the googly eyes on the black-painted jar and the black spiders on the white-painted jar and you will love the results. Enhance the festive air with ribbons. Get the tutorial via merakilane.

The combination of chalky paint and some awesomely spooky characters made for a perfect Halloween decoration. Attach various vinyl shapes cut in Halloween designs on jars. The idea is to remove the vinyl shapes after the coats dry so that the first white area shows in the form of the vinyl shapes. Get the tutorial via sweetrosestudio.

Use these elegant Mason jars to add some glam to your Halloween party. Turn them into candle holders with a Halloween theme. To give the candles an amazing look, just paint them with various colors of black or orange. Black ribbons could be used to complete the spooky attraction. via source. 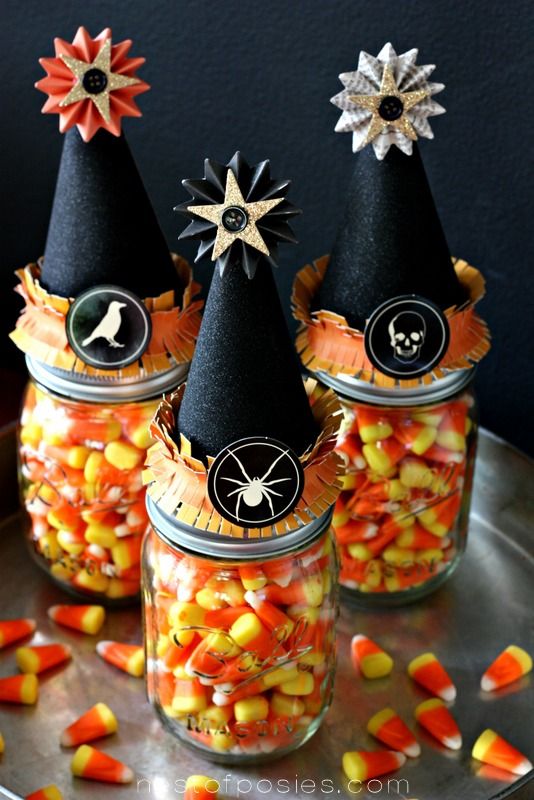 There is simply no limit to the things you could try out when making Halloween treats for kids and adults. Fill the jars with multi-colored candies and cover the tops with black witch hats decorated with Halloween colors. This is a great Halloween craft for kids to make with fun! Get the tutorial via nestofposies-blog.

You do not need anything more than your mason jar, green paint, an old Halloween sock and pipe cleaners to create an adorable Halloween witch. The black eyes of the witch and the green body fit well into the popular notion of witches that’s vile, envious and threatening. via giraffe-legs.

Want to make a simple Halloween luminary? Why not decorate your jars with Halloween’s iconic symbols such as the pumpkin and black cat? They took absolutely no time at all and will be perfect to decorate outside or inside! source

Do you like adding fun and not so spooky stuff to your Halloween party? This would be a gorgeous decoration for your sofa table or a mantel! Get the tutorial via cupcakesandcrinoline. 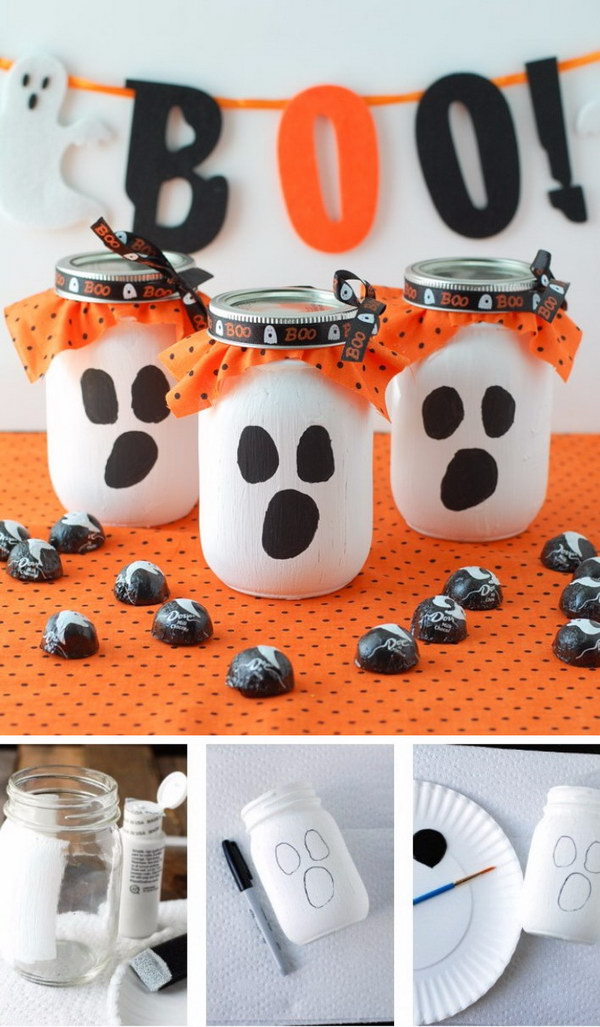 These mason jars all in white painted with large black eyes are the perfect Halloween treats for friends and family. You can also cover the lid of the mason jars with a polka dotted orange piece of cloth with a BOO banner to complete the craft. Get the tutorial via foodlovinfamily. 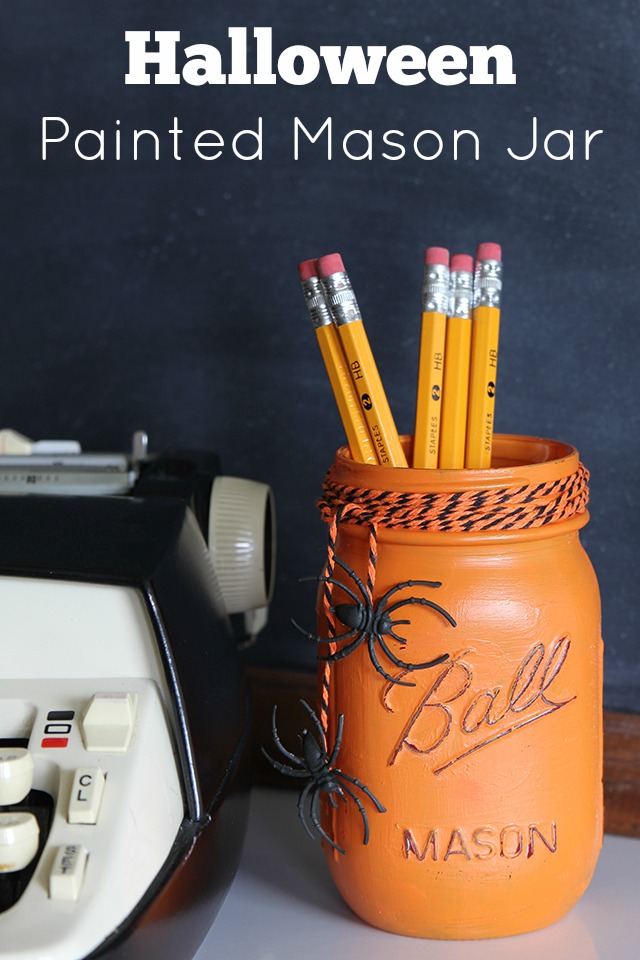 Let your mason jar get a Halloween appeal by painting it all in orange and attaching two or three plastic spiders on its sides. You can ties some decorated thread in the jar to give the whole thing some exceptional touch of Halloween. The orange color when done properly never disappoints in terms of exposing spirit of Halloween. via houseofhawthornes.

Eerie Spiders in a Jar Glow 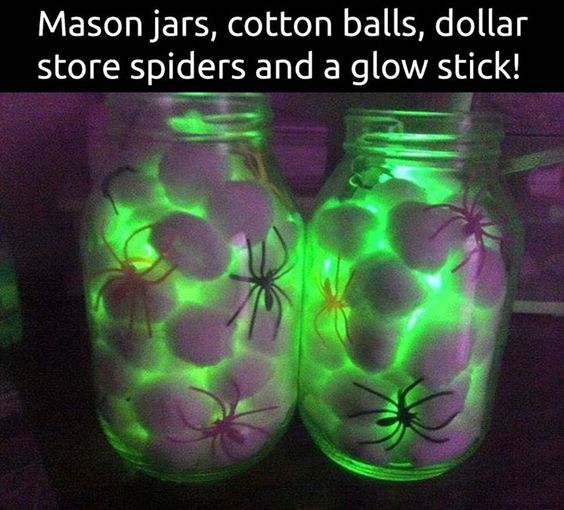 This craft gives your mason jar an eerie spectacle by giving it a ghostly glow with scary image of dark spiders lurking menacingly from within. To make creepy spider jars, fill a jar with some fake spiders (or a couple real ones!!) some cotton balls and insert a glow stick in the center. via budget101.

Here is another idea you can use to make your Halloween memorable. Create Jack-o-Lanterns with your mason jars, tissue paper, spray paint and more. The battery-operated tea-light candles within these jars emit a haunted glow to engage your Halloween passions. Get the tutorial via mycraftyspot.

Scary Eyes In A Jar 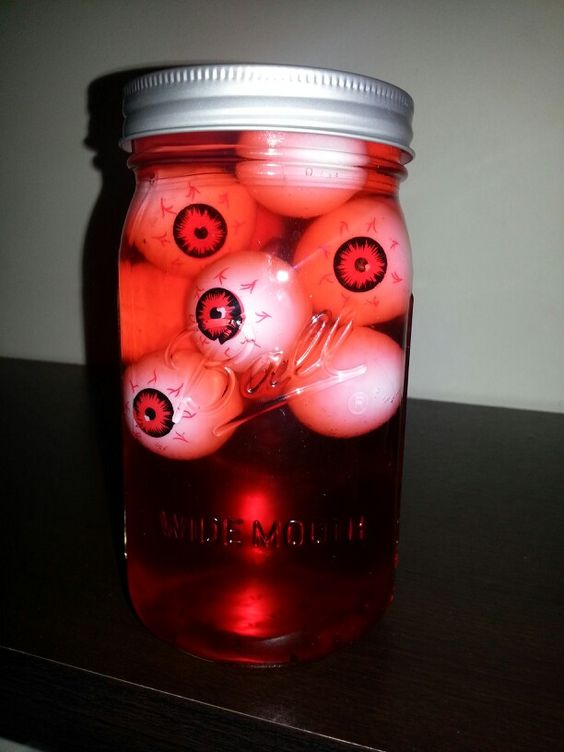 Imagine some zombie eyes gazing at you with a somewhat cold-blooded intention. This is what this Halloween decoration is meant to evoke with its scary eyes. The reddish background of the jar, which is made possible by food coloring is what makes the whole spectacle disturbing. To come up with this decoration, you need a few items that include a mason jar, red food coloring, water, and bag of zombie eyeballs. source.

Can you imagine that you do not need anything more than a gauze bandage tape wrapped mason jar, a flameless votive candle and some googly eyes to achieve this terrifying craft? The image of mummies gazing at you from an orange glow of the light can be quite hair-raising. This decor works very well when the other lights of your indoor space are dimmed. Get the tutorial via alittleclaireification.

There is something absolutely terrifying about some ghostly hands emerging out of hideous background to hold up a big menacing zombie eye in a mason jar. Get the tutorial via pandoras-craftbox. 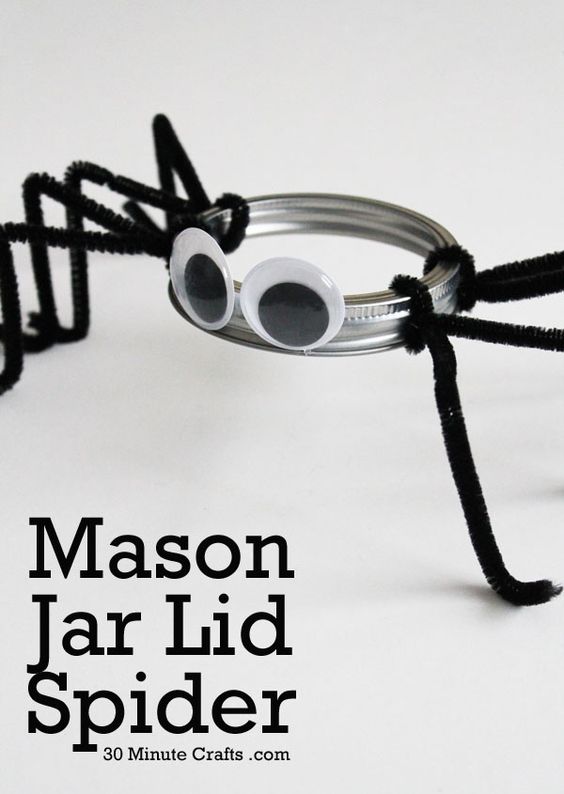 The awesome spider craft is one of the simplest Halloween decoration you can create within 15 minutes or less. All you need are the ring from a mason jar, googly eyes and pipe cleaners. Get the tutorial via 30minutecrafts.

Easy Glow In The Dark Day of The Dead Lanterns